January 2020
BBC – 8th January
“Lost footage of David Bowie will be shown for the first time since it was shot in 1998.
The 30 minutes of experimental film had been stored in a chest at Leicester’s De Montfort University for many years.
It was shot by friend and collaborator Prof Martin Richardson, who used it to produce a hologram for an album insert.
The footage is of the Ziggy Stardust performer walking towards the camera, doing various poses.
Prof Richardson used the 35mm film to create a moving hologram of Bowie, which featured as an insert in his 1999 album Hours.
The holography academic went to New York to film Bowie in his studio.”
https://www.bbc.co.uk/news/uk-england-leicestershire-51040616

September 2019
We congratulate PhD alumna Dr Pearl John on securing a Talent Developing Grant from A Space Art. She is working with Post Doc researcher Dr Vivian Amos, who is sharing examples of the latest developments in colour holography. 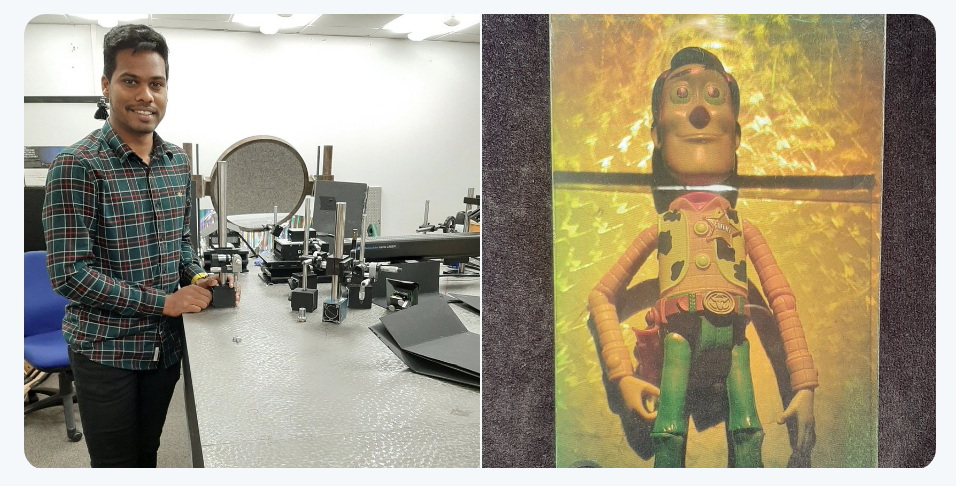 August 2019
The group has moved to join the Faculty of to Art, Design and Architecture at De Montfort University, to re-establish and sustain our efforts within the creative sector, whilst maintaining a strong technical and scientific grounding.

July 2019
We would like to congratulate De Montfort University Modern Holography Dr Pearl John on her graduation.

June 2019
We would like to congratulate De Montfort University Modern Holography Ph.D. researcher Tine Barkmann on the successful defence of her Thesis on the 18th June 2019!

March 5, 2019
Visiting Professor Stanislovas (Stas) Zacharovas gave the presentation: HOLOGRAMS IN OUR DIGITAL AGE at De Montfort University. Stas’ fascinating lecture explained the principles behind 3-D holographic printing using sets of images made from digital video. The end result is a ‘glasses-free’ three-dimensional scene in true-colour and animation. The talk looked at the creative application of these holograms together with the science behind the technology.

In addition to DMU students and staff, David Brotherton-Ratcliffe and Tal Stokes from Geola UK, Jeff Blyth from Cambridge and Hans Bjelkhagen from Wrexham Glyndŵr University were also attending the lecture.

Zacharovas is a Holography and Optical High-Security expert with over 20 years experience in the field. He wrote the much revered “Practical Holography, Fourth Edition” together with Graham Saxby. (2015, ISBN 9781482251579). In September 2018 he received 2018 the Denisyuk Medal for a life work in holography from the Russian Optical Society.

February 2019
De Montfort University Modern Holography post-doc researcher Dr. Vivian Amos is presenting the paper “A holographic representation of three-dimensional J9 space” at the Practical Holography XXXIII: Displays, Materials, and Applications conference at the SPIE Photonics West OPTO in San Francisco.
The Modern Holography group would like to send our good wishes to all presenters and participants.

December 2018
We would like to congratulate De Montfort University Modern Holography Ph.D. researcher Pearl John on the successful of her Thesis on the 19th December 2018!

October 2018
We would like to congratulate De Montfort University Modern Holography Ph.D. researcher Amani Althagafi on the successful of her Thesis.

June 2018
The Modern Holography group from De Montfort University presented holograms and academic papers at the 11th International Symposium of Display Holography ISDH2018 in Aveiro, Portugal. The group was represented both in the Art in Holography: Light, Space & Time exhibition at Aveiro City Museum and in the Technical exhibition at the University of Aveiro.

April 2018
DMU researcher wins national recognition for innovative glasswork with holograms
De Montfort University Modern Holography Ph.D. researcher Charlotte Wilkinson is creating a pioneering way to incorporate holograms into her glass sculptures to produce truly groundbreaking works of art. Her creations have been at the British Craft Trade Fair, the biggest of its kind in the UK, where she was named Craft and Design Magazine’s ‘Best Newcomer’. The award cited Charlotte’s innovative work with holograms as well as the overall quality of her craftsmanship, the presentation of her work and her business acumen.
Craft and Design Magazine

December 2017
We would like to congratulate De Montfort University Modern Holography Ph.D. researcher Vivian Amos on the successful of his Thesis.

November 2017
of The Hologram by De Montfort University Modern Holography Professor Martin J. Richardson and John D. Wiltshire’s The Hologram: Principles and Techniques  the various types of holograms in their multiple forms and explains how to create and apply the technology. The Hologram is a well-designed instructive tool, involving three distinct disciplines: physics, chemistry, and graphic arts. This vital resource offers a guide to the development and understanding of the recording of materials, optics and processing chemistry in holography.
ISBN-13: 978-1119088905

July 2017
Modern Holography and the Imaging and Displays Research Group was represented at the Leicester Business School “Beyond Business as Usual” event.

2016
Royal Photographic Society bursary for DMU holography archive
An important archive of holograms and related materials has been given a boost with the award of a £6,000 Royal Photographic Society bursary. A large archive of research materials gathered by Professor Sean Johnston, a physicist and historian of holography at the University of Glasgow, was donated to the DMU collection. The archive included correspondence and interview recordings with hundreds of seminal figures in the field such as Emmett Leith at the University of Michigan and Yuri Denisyuk of the Vavilov Institute in St Petersburg. Prof Johnston’s archive also contained reminiscences, photographs, exhibition , unpublished documents and holograms from holographic artists, engineers, scientists, business people, enthusiasts collectors.
About DMU – Holography Archive

December 2015
Professor Sean F. Johnston’s book Holograms: A Cultural History is published. (ISBN-13: 978-0198712763)
“Engineers, artists, hippies and hobbyists have played with, and dreamed about, holograms. This book explores how holograms found a place in distinct cultural settings. It is aimed at readers attracted to pop culture, visual studies and cultural history, scholars concerned with media history, fine art and material studies and, most of all, cross-disciplinary audiences intrigued about how this ubiquitous but still-mysterious visual medium grew up in our midst and became entangled in our culture. “

Professor Martin Richardson provided holograms from his collection for the book, and images of transmission holograms for the book were captured in the De Montfort University holography laboratory.

The international festival celebrates creativity and innovation through a unique partnership between the British Government and major including the and is part of the GREAT Britain campaign promoting the UK as a world-class destination for trade, tourism, investment education – now active in 144 countries. DMU was selected by 10 Downing Street to represent British education at the GREAT festivals around the world. The university will part alongside fellow GREAT partners: the world-leading companies of HSBC, BBC Worldwide, Jaguar Landrover, PwC, IHG British Airways. British Chamber of Commerce Turkey. UK Government: Foreign & Commonwealth Office report.

November 2013
Bryan May visits De Montfort University to talk about his research into Victorian stereoscopic cards. He also makes a hologram with Professor Martin Richardson.